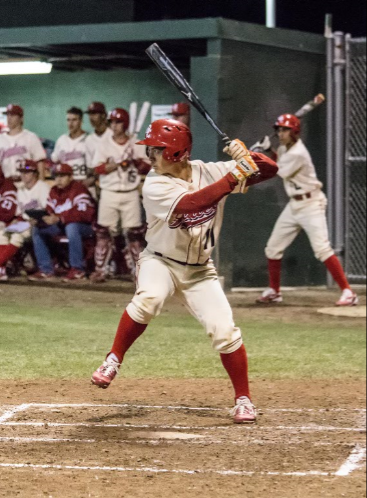 In a series beginning Feb. 9, the Bakersfield College Renegades suffered a three-game sweep at the hands of the visiting El Camino College Warriors, dropping their record to 4-6 on the season.

In game one, the Warriors capitalized on seven hits and three Renegade errors on their way to a 4-0 victory as El Camino pitcher Cassius Hamm tossed a no-hitter on the strength of 16 strikeouts and four walks.

His counterpart, Taylor Burns, struck out four and walked two while scattering six hits over seven innings before giving way to Cain Roberts. Game two of the series was scheduled for Feb. 10, however, inclement weather forced postponement, resulting in a doubleheader on Feb. 11.

The postponement was the second experienced in the Renegades’ schedule to this point, the other occurring Feb. 7 against Moorpark. Game one of the double-header’s initial start time of 10 a.m. was pushed back to 1 p.m. as the Renegades worked to ready the field.

The Warriors again used errors to their benefit, converting runs on each of the five errors committed by the Renegades, resulting in a 7-1 victory. BC starter Austin Toerner took the loss for the contest, despite giving up only one earned run and striking out eight over seven innings. The finale of the series was tightly contested, as BC starter Luke Andrews struck out nine and walked only one in a complete game loss.

When asked about the team’s play throughout the series, head coach Tim Painton said, “[Their] effort is the same, we wasted three quality starts this weekend out of our pitching staff. You can’t ask for more than we got out of those guys. We’ve pitched really well, pitching has kept us in every ballgame we’ve played.”

Through Feb. 12, the Renegades pitching staff has averaged 6.2 strikeouts, seven hits and three walks per game, while posting a 2.30 ERA. Errors have loomed large throughout the Renegades’ season; the team has averaged 3 errors per game through its first 10.

Yet, despite committing 12 errors in the first two games of the season, the team has committed more than 2 errors only three times since. “Bad defense shows up at inopportune times and that’s really the difference in games we’ve won and lost this year. We play good defense when we win, we play crappy defense when we lose,” said Painton.

Offensively, the Renegades are averaging 3.6 runs despite batting .207 and averaging nine strikeouts per game. The renegades have shown patience at the plate however, averaging 4.8 walks and 6.7 hits per game.

During the past four games, however, the Renegades have only managed two runs, leading Painton to refer to offensive production as “spotty”.

Adding perspective to the team outlook, Painton said, “We are 10 games into a 40-game season, so you just keep building and try and repair what’s broken and move forward, that’s all we can do. Hopefully the pitching continues to do what it does, and hopefully we can get better defensively and offensively, that’s the goal.”

Looking ahead, the Renegades will face Golden West in a threegame series beginning Feb. 16 at Gerry Collis Field.