Softball finding the swing of things with wins 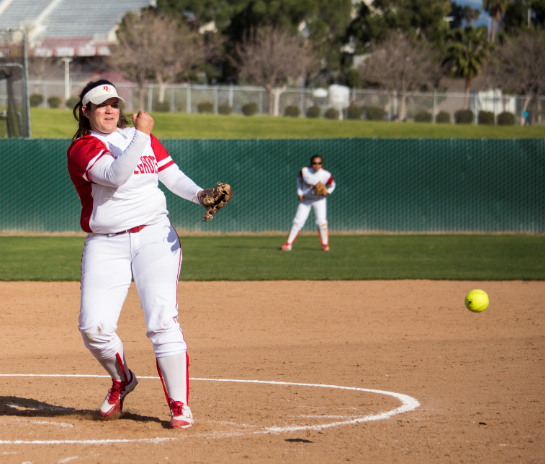 Freshman pitcher Mckenna Valencia delivers a pitch in game one of a doubleheader vs. West Hills Coalinga, Feb. 26.

In the last six games the Renegades softball team has played, they have won three. The two most recent wins occurred at home, during a double header against West Hills Coalinga on Feb. 26, perhaps signaling the team has a better sense of how strong they are.

Before those six games, five consecutive games were postponed. Game one of the Feb. 26 doubleheader ended with Bakersfield winning 10-4 on the strength of 12 hits and eight RBIs. West Hills had six hits and four RBIs. Bakersfield College’s highest scoring inning was in the bottom of the second and the fourth.

The Renegades scored one run in the first inning, though Alexis Rodriguez opened the scoring on a passed ball as Naizemarie Ubay advanced to second. Michelle Puente singled, and advanced to third on the throw, bringing Chelsey Herrera and Ubay home for two runs.

Then Puente scored, on an error by the third baseman after Kathryn Aldrete reached first.

Another win for the Renegades after beating West Hills in the second game 5-2.

Coach Christie Hill explains on the outlook of both games and how she thought the team held up against West Hills “We looked pretty good against West Hills in both games, there are a few things that we could have done better, but the girls recognized what they could do different and I’m confident they will make the adjustments in our next games.”

BC’s pitching has had a good start throughout the beginning of the season with 47 strikeouts in total between all three starters. 43of those strikeouts have come from McKenna Valencia, who also has four wins and five losses with a 6.77 ERA on the year.

“The key to both our pitchers having successful games is throwing strikes. Working ahead in the count and limiting number of walks we allow. We have struggled a bit with that, but I have faith that both

of our pitchers are getting better and stronger inning by inning,” said Coach Hill when speaking about her pitcher’s success.

Offensively, the team has performed well collecting 73 hits, 55 runs, and has batted .266 to this point of the season, and Coach Hills is thrilled to see her team putting high numbers, even though she already knows what this group of girls can do on the plate.

“We have some great hitters on this and hitting is contagious. We always talk about going to the plate with a plan and executing that plan.

“We do a lot of tee work and front toss, but also remind the kids that when they go to the plate they have to have a clear mind, see ball, hit ball!”

The Renegades’ next game will be at home against Oxnard on March 2, and at Los Angeles Pierce on March 7.