Life deeper than serve for Tucker 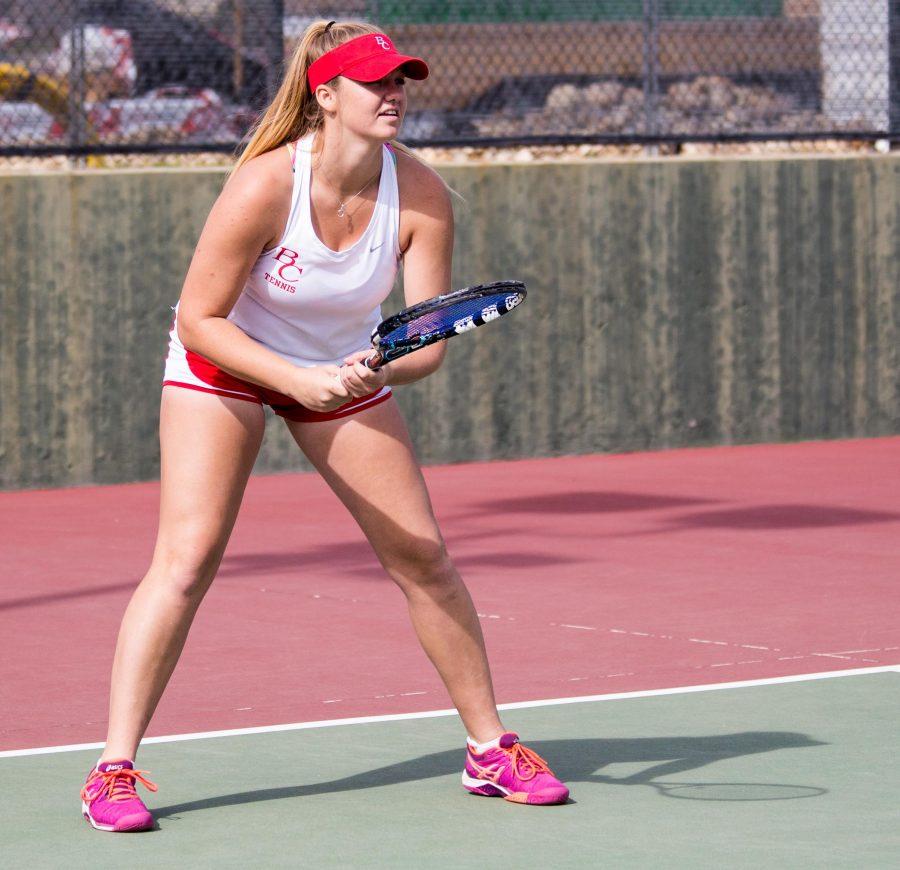 Riley Tucker prepares for her opponent from Folsom Lake to serve on the Wednesday afternoon game on March 8.

Bakersfield College women’s tennis team has been off to a great start this season with a 14-3 overall record.

Each of the players have been working as hard as they can to get to this point. One of those players is Riley Tucker.

Tucker is a sophomore from Garces High School where she played tennis all four years. “I’ve been playing tennis forever,” she said.

“Once I could pick up a tennis racket, I’ve been playing. I didn’t really have a choice in the matter. Both of my parents and older sister all played tennis, so when I came around, it’s just what I was supposed to do,” she said.

Tucker said that her early introduction to tennis made her competitive growing up.

As a child, she was very competitive with the other kids because she just hated to lose.

At BC, she’s found herself happier than ever this season.

“It’s been awesome. It’s way different than last year or any other tennis season I’ve had before. On and off the courts, there has just been a lot of success with friendships that I’ve been building with my teammates, and the person I’ve been becoming as a player. This season has mainly been about growth for not only me, but the rest of my team,” Tucker said.

Tucker is deciding on whether or not she’s going to pursue tennis at the four-year college level or if she is solely going to attend school.

Either way, she plans to keep tennis in her life whether she’s playing at a four-year level, or if it’s just recreational.

Tucker is a Child Develop ment major at Bakersfield College.

“When I was in high school we would visit and help out special needs children, so I think that’s what inspired me to want to be a teacher,” she said.

When asked about how she manages school and sports, she said, “My first year was one of those struggle years doing tennis and school. I was like, ‘oh, I’ll do it later after tennis,’ but I never did. This last semester, I finally got it together, and it all clicked for me. In order to play tennis, I have to make grades, and I want to play tennis, so that’s just how I look at it now.”

Like many athletes, Tucker has her own way of getting in the zone before a match. She and her teammates listen to music to get ready for matches.

“In our van, we play a lot of good music that our coach calls our ‘let’s get pumped up’ music. Nothing too old, but it’s mainly like throwbacks,” Tucker said. “We listen to ‘Fight Night’ by Migos, and other cool rap songs to get us pumped. Plus, our coach listens to it, too, so we all kind of get into it.”