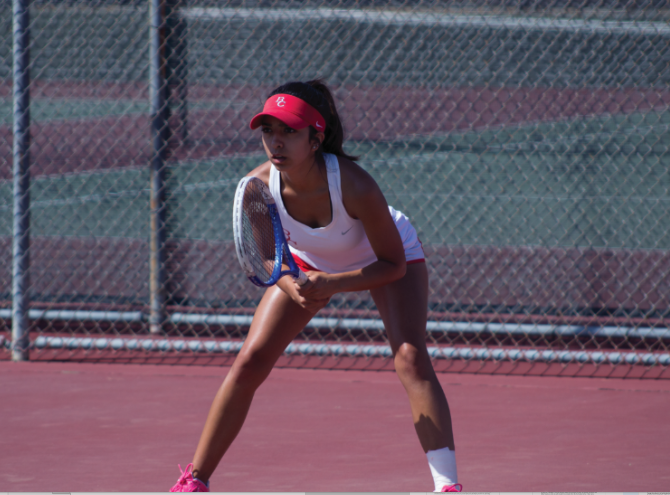 The Bakersfield College women’s tennis team had a lot of bright spots this season, and one of the brightest has been freshman Ariana Acevedo. With her doubles partner Serena Contreras, the two did not lose a doubles match all season until the final tournament they played in. Acevedo has done a lot in her first season with the Renegades. She earned firstteam honors for doubles with her partner and longtime friend Contreras (Acevedo nicknamed them Venus and Serena). It was during high school when she decided to try something new. That something new was tennis.

“I realized I wanted to try something new with my friend and now doubles partner, so we ended up trying out. And we made it to varsity our freshman year,” said Acevedo. “I ended up really enjoying the sport and only wanted to get better.” From her first season playing tennis in high school, she decided she wanted to solely focus on tennis, so she quit playing softball and devoted her free time to playing tennis.

After high school she decided that she wasn’t quite finished with Tennis yet, so she came to Bakersfield College to further her tennis career. “Coming to BC, and continuing to play tennis was one of the best decision’s I’ve ever made,” Acevedo said with a smile. “This has been the best year of my tennis career yet, and only more to come next year.”

As a freshman, Acevedo had to adjust to class and practice schedules, but she has found her footing in the academic and athletic worlds. “It has been an amazing experience playing at BC to working hard in and out of the practice,” she said. “It was definitely a struggle trying to fit tennis and school since we were so wrapped around tennis pretty much all days throughout the week. Weekends and late nights is when studying and homework took place.”

Acevedo, along with five other freshmen, will be returning to play next year. “Only five of us will be returning next year while our three sophomores are out. It’s going to be different without those three. They were a big part in our wins this season, and a big loss in our tennis family, but as freshmen we’re ready to even go further than we did this season and create an even stronger bond,” Acevedo said. On April 27-30, the women’s team participated in the State TournamentOjai Tournament as their last competition of the season.

Acevedo and her partner Contreras participated in this tournament as well as Brittany Aguilar, Paige Darstein, Kaylee Defrees, and Riley Tucker. AcevedoContreras won their first doubles match but lost the second.