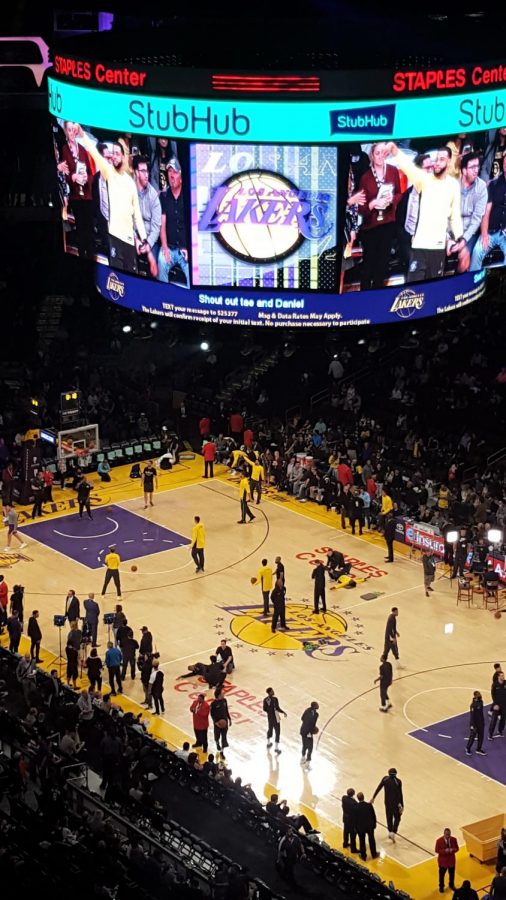 View of the court as LA Lakers and Milwaukee Bucks practice before the game.

Milwaukee Bucks defeated LA Lakers 124-122 in a game that brought the audience of the Staples Center to their feet.

The game began at 7:30 p.m. and people enjoyed a slideshow of former and current Lakers. The Lakers Girls were also there getting people excited for the match while the players prepared to start.

Brandon Ingram, Lakers forward, was the first to gain possession of the ball; however, Milwaukee Bucks’ Eric Bledsoe, point guard, soon stole the show with a 24-foot three-point jumper. Kyle Kuzma, Lakers power forward, made a 26-foot three pointer which drew applause from the audience. Shooting guard Josh Hart also made several two-point shots, but the first quarter ended with the Lakers behind. The score was 39-34.

The second quarter began with changes. Channing Frye replaced Kyle Kuzma. For the Bucks, Giannis Antetokounmpo, forward, replaced Khris Middleton. There were also several fouls; approximately 13 free shots gave the Bucks a significant advantage. Brandon Jennings, point guard, and Antetokounmpo made most of the free throws. The Lakers tried their best but continued to lag behind. Kuzma missed shots including a 28-foot three-point pull-up jump. The quarter closed at 68-57 in favor of the Bucks.

The audience seemed to be losing interest, and the third quarter resulted in a lot of disappointed Lakers fans. The quarter began with a 27-foot three-point jumper by Bledsoe. He continued to dominate with quite a few jumpers and driving dunks. The Lakers made some unfortunate bad passes, but free throws helped them somehow keep up with the Bucks. Still, the quarter ended badly for the team with a score of 97-83 in favor of Milwaukee.

People wearing Lakers memorabilia began to leave even before the fourth quarter started. Those who stayed, however, were in for a treat. Although the team eventually lost, the fourth was a particularly strong quarter.

Ivica Zubac, Lakers center, led the team’s fourth-quarter comeback. By minute eight, the score was 102-98, and the audience got loud. By minute 2, Ingram made a 26-foot three-point jumper that put the score at 110-110. Unfortunately, he had to leave the game because of a neck injury. After that, Antetokounmpo made a two-pointer, and Julius Randle followed with a 2-foot layup. The score was 112-112, which meant overtime.

During overtime, Lakers’ Kuzma and Hart made several two-point shots. Unfortunately, Bucks’ Bledsoe and Antetokounmpo led their team to victory with a final score of 124-122.