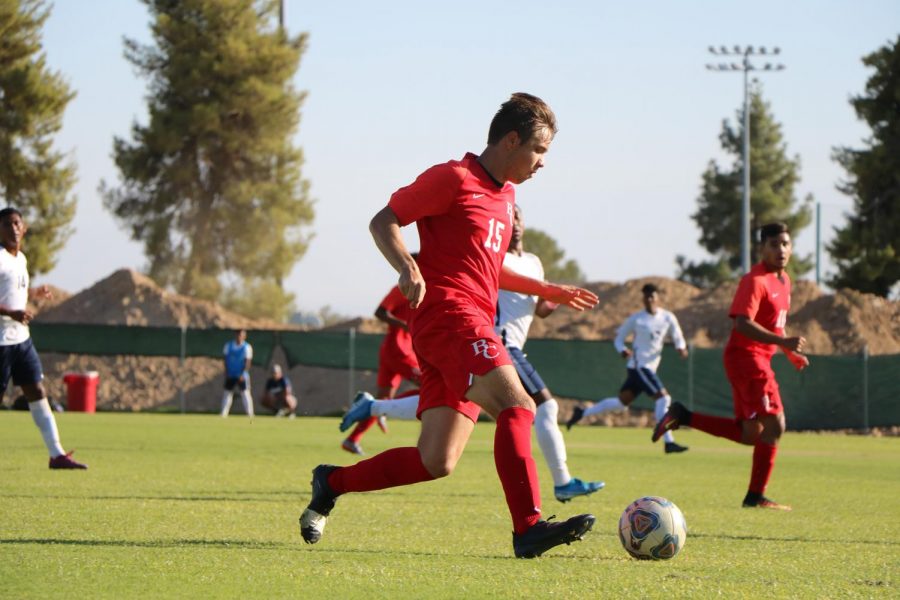 Asier De Luz (15) is passed the ball and must now make a play or find a shot.

The men’s soccer team of Bakersfield College battled with El Camino College on Tuesday, Oct. 1 and sadly did not come out on top with an ending score of 1-0.

During the first half, both teams struggled plenty. Neither team could make it past each other’s defense.

BC had many blocks within the 18-yard box and the six-yard box, their goalkeeper Armando Alvares, stopped at nothing to protect the net, especially in the first half. Another BC player, Asier De Luz played very good defense and had about two steals and three blocks in the first half of the game.

There were not many times that BC had a chance to score, El Camino made about ten attempts, two of which were blocked by Alvares and eight that were missed completely.

Going into half time, the score was 0-0 yet the crowd waited for both teams to return to the field and fight on.

In the second half, BC seemed determined to make a play and score, they fought very hard and gave one another tough love when a teammate made a mistake. There was positive energy coming from BC yet a little frustration arose from a few players.

At this point BC started to slip, making a huge number of turnovers to the opposing team, they could not even attain the ball to have a chance to attempt scoring. After 20 minutes of back and forth playing an opening arose for El Camino, player 10 Eduardo Grados (El Camino) slipped past a full back and a center back, he took a hard swerve ball in the 18-yard box and scored the first and only point of the game.

During the middle of the game a player from El Camino started to heckle at a BC player, he then received a yellow card from the referee and was warned of being ejected from the field.

This infuriated BC and made them play harder, with only 25 minutes left in the game they started to keep the ball more and attempted shooting twice, yet one shot was blocked and another only missed by a hair, the game then came to an end, BC accepted their defeat and shook hands with the contestants, they then went straight to their families who showed them love and took them home.