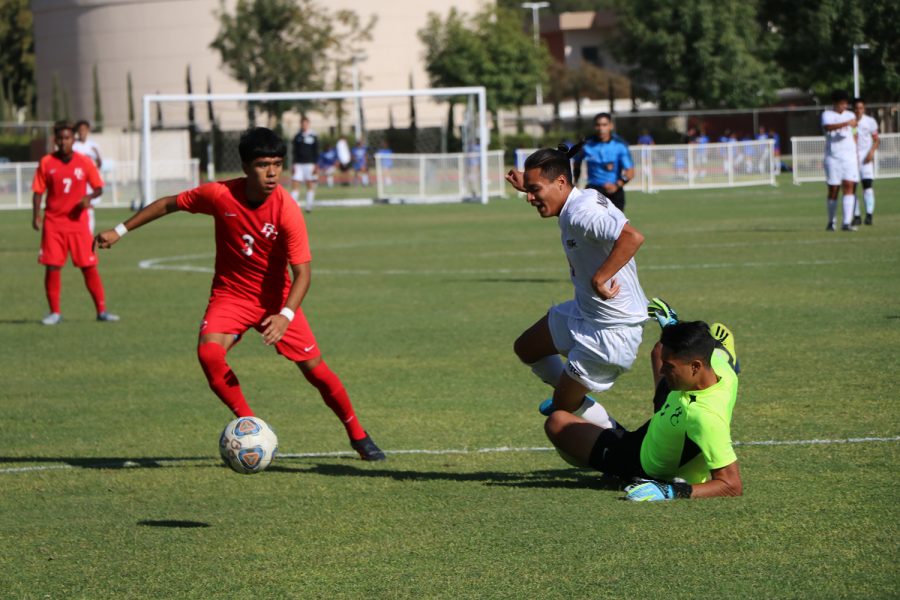 As Armando Alvarez (1) slides to reach the ball, he just misses by an inch running into a player from Antelope Valley, while Edgar Gonzalez rushes to steal the ball before the Antelope Valley player reaches it.

In three minutes of the first half a penalty was called against Antelope Valley, Edgar Gonzalez (3) from Bakersfield College went to the line for the penalty kick (pk) and scored the first goal of the game.

Both teams managed to get really close to making a goal but missed or were blocked by the opposing team.

After 40 minutes of miscalculation and aggressive playing the teams went into half time. Usually around this time most of the players from each team are still warming up after a short talk with the coaches, but this time neither team warmed up at half time, the coaches talked to their players through halftime, when looking at the players faces you could tell it was a serious matter.

During the second half of the game the teams showed more aggression towards each other, there was more shoving, players were falling, some would get injured and lay on the floor for a few minutes before getting back to playing the game.

At one point, so many people were getting hurt that the refs missed a player from Antelope Valley who had been laying on the field for a couple of minutes before ever being noticed.

As the teams fought very hard to make a goal the defense stopped them from scoring. By the end of the second half, the score remained 1-0 leaving BC with the win of their first conference match if the season.

This win now leaves the BC men’s soccer team with two wins five ties and 1 loss for the thirteen games they have played thus far.