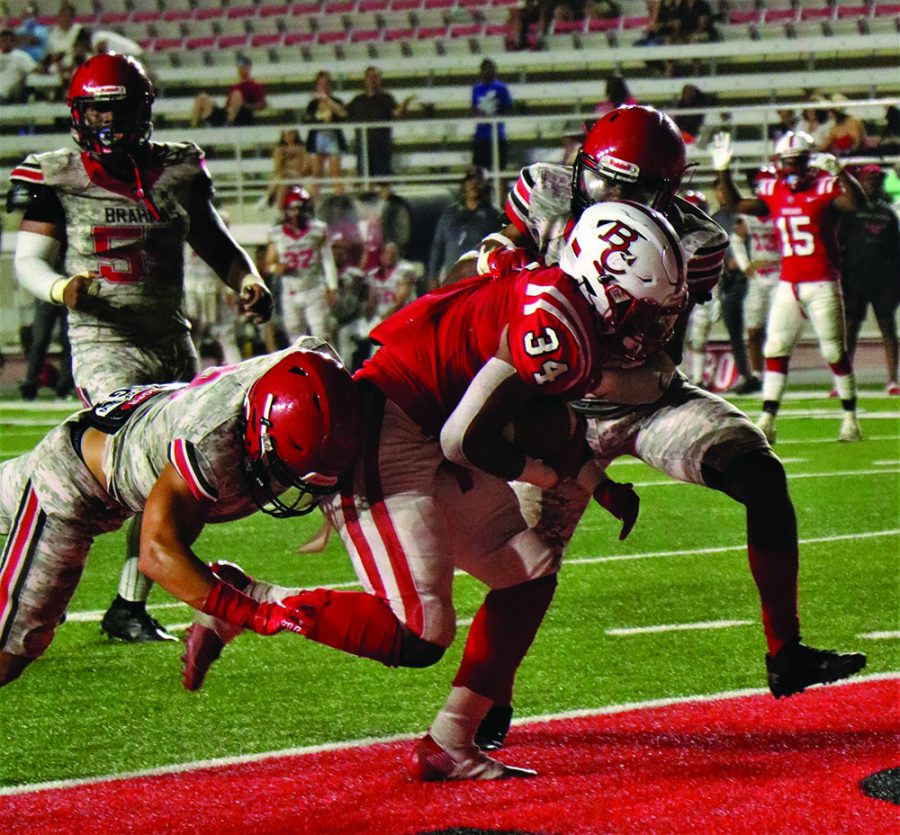 Surrounded by defenders, RB Anyale Velazquez makes his way into the endzone to score in BC's rout of Pierce in the season home opener on Sept. 3.

The first touchdown was made by Jihad Marks, assisted by BC quarterback Joseph Campbell, and their teammates followed in their footsteps throughout the game.

The Renegades’ defense also stepped up against the Brahmas’ offense with multiple interceptions, first by Christopher Thompson in the first quarter, and another by Jayden Harris-Elvin in the second quarter.

The team worked well together to keep the numbers up in the first half, going into halftime with a score of 49-6. One of the major plays was made by Freshman Jaquell Bonner who scored an 80-yard touchdown in the second quarter. He had a few words about his play. He explained, “I felt good about it. I had not only that touchdown but two touchdowns during the game and I am only a freshman. We are going to go far this season, and when I say that, I mean deep into the playoffs.”

As the second half began, the Renegades continued to put numbers on the board. Bonner laid down another touchdown and kept the rhythm of the game in their favor.

One of the major factors that goes into how well these players perform is weather conditions. The game was originally scheduled for 6 p.m. but was pushed back an hour due to extreme heat. Considering the way the Bakersfield College football team carried out their duties on the field, it was clear that the weather had no negative impact on the Renegades.

In fact, the team ended the game with a touchdown and celebrated their victory right there on the field.

After the game, the players talked about their expectations of the season going forward.

“The game was cool, we started off a little slow, but we definitely got it done on offense,” running back Anyale Velazquez said.  “The lineman did really well, and the rest of the season is only up from here.”

Coach R. Todd Littlejohn explained that the team’s performance resembled the way they have been practicing all summer. “Thankfully yes. It was good to see multiple guys get an opportunity to perform what we have been preaching all summer,” he said.

With this dominant performance, the Renegades set high expectations for the season ahead.