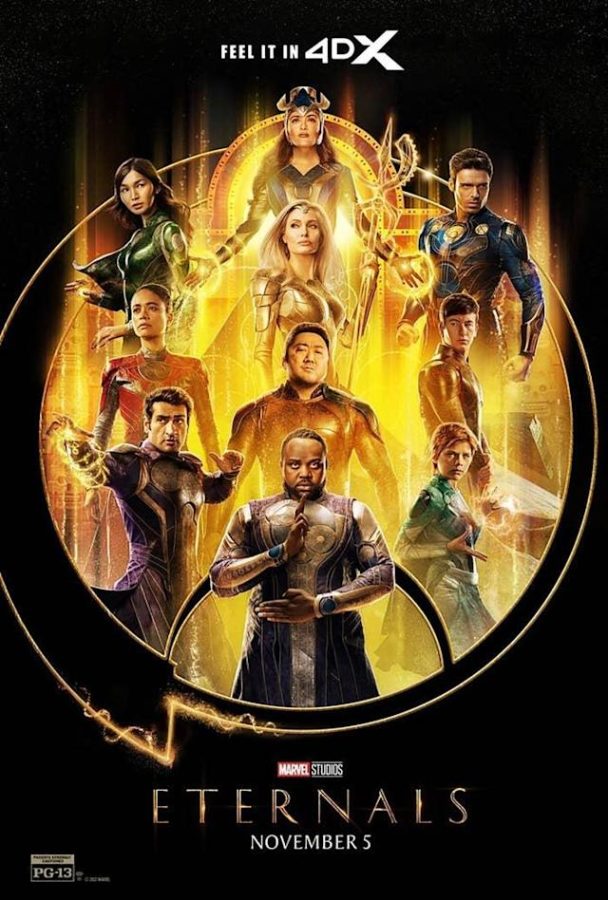 Eternals is a great film, but not the best in the Marvel Cinematic Universe.

Marvel’s latest project, “Eternals,” dropped on Thursday, Nov. 5, and I could honestly say it is a great film, but not the best Marvel Cinematic Universe movie.

“Eternals” tells the story of immortal gods that are sent from Olympia by the Celestials to protect humankind on earth from the deviants.

The film stars Salma Hayek as Ajak, Angelina Jolie as Thena, Gemma Chan as Sersi, Lauren Ridlof as Makkari, Richard Madden as Ikaris, Kit Harrington as Dane Whitman, with Barry Keoghan as Druig and so many more.

When the Eternals begin to dispute with one another in the second half of the movie, it takes an unexpected turn. Ajak has the power to heal and is the leader of these immortal superhumans. She is the only one with the ability to communicate with the creators of the universe (Celestials,) but rarely appears in the film.

The film tends to go back and forth with past and present events to help the audience understand why they never appeared in other Marvel films till now. The alternating sequences are a bit confusing and as a movie enthusiast, I thought it would work best if it were set in chronological order. However, because this is a Marvel film, they know how to get the audience’s attention.

My two favorite Eternals would happen to be Makkari, who is a speedster in the film and Druig, who has the power to manipulate minds. Sersi has the power of atomic manipulation and thought her power was too dull, Dane Whitman is a human in this film and is more of a supporting role, but in the comics is known as The Black Knight. As a MCU fan, it would be interesting to see what they do with these characters in the future.

“Eternals” has two post credit scenes, one of the scenes where is Thanos’ younger brother Eros, known as Starfox, made an appearance. Eros is portrayed by Harry Styles and I personally thought it was really random to have casted Styles. There were too many things happening in the film.would rate it an 8/10, but re-watching Eternals more than once would help me keep up.