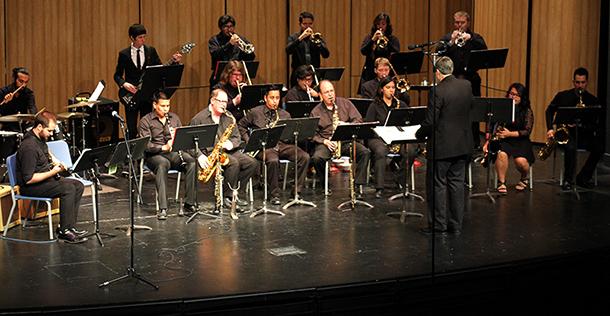 BC Jazz Ensemble director Kris Tiner introduced the event, saying, “We’ve got a nice program for you tonight. I’ve been directing this event for the last 11 years, and it’s always a pleasure to show what we’ve been working on. We call it a panoramic history of jazz starting almost at the beginning with some swing music…and move through the modern jazz period, and by the end of the night we’ll be well on our way to the funk excursions of the 1970s and 80s.”

The ensemble opened with performances of works such as “U.M.M.G.” by Billy Strayhorn and “Isfahan” by Duke Ellington and Billy Strayhorn, and closed with performances of “Self-portrait in Three Colors” by Charles Mingus and “Wiggle Waggle” (written for a Fat Albert TV special) by Herbie Hancock. A total of nine songs were performed with a 15-minute intermission after the fifth.

Among the musicians, a select few were featured multiple times through performance solos.

The audience consisted of roughly 100 people, and its most positive reaction was after the ensemble’s performance of “Salt Peanuts” by Dizzy Gillespie and Kenny Clarke. Tiner urged the audience to sing along with the ensemble as they sang the “simple” lyrics, “Salt peanuts, salt peanuts.”

“These guys have worked really hard. The fall is always unpredictable. We’re just getting it together and hoping we get a rhythm going before concert time. These guys have really ramped it up a notch,” Tiner said about his ensemble and about the concert.

Tiner is planning on performing a Miles Davis project in April 2016 for the Jazz Ensemble Spring Concert.