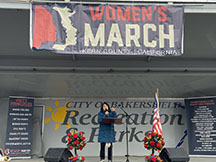 Dolores Huerta speaking about the equal rights for women amendment at the Women's March on Jan. 18.

A part of the community of Bakersfield came together to participate in the 3rd annual Women’s March at Mill Creek Park on Jan. 18.

At Mill Creek Park there were vendors, information booths, and attendees standing up for what they believe in.

“Latina Leaders is a nonprofit organization established 25 years ago and our mission is to develop and empower women in our community and develop opportunities for Latina leaders,” Naomi Elijah, a member of the Latina Leaders of Kern County, said.

Another booth at the March encouraged and helped other participants to create posters with words of inspiration for women.

“I am volunteering with the sign making booth, but I am also out here supporting women and everybody in the community,” Anjelica Baez, a freshman at Bakersfield College who is majoring in liberal arts, said. “It [helping younger children make posters] is really empowering, and they are so young, it is so beautiful. It feels really nice to have a community to support you.”

“We will never have peace until feminists take power,” Dolores Huerta said. “Why do I say that? Because I know that there are many men that are feminists and care about women’s rights.”

In Huerta’s speech she briefed the audience on the equal rights amendment that feminists have been fighting for.

“The United States is only one of the few countries that have not ratified the equal rights amendment for women, we are supposed to be the leader of democracy in the world, and women do not have equal rights,” Huerta said.

Huerta stated that in Virginia the equal rights amendment for women passed and it was the last state that was needed to take the amendment to the senate.

At the March many feminists were celebrating the ratification of the 19th amendment which was passed in 1920 and gave women the right to vote.