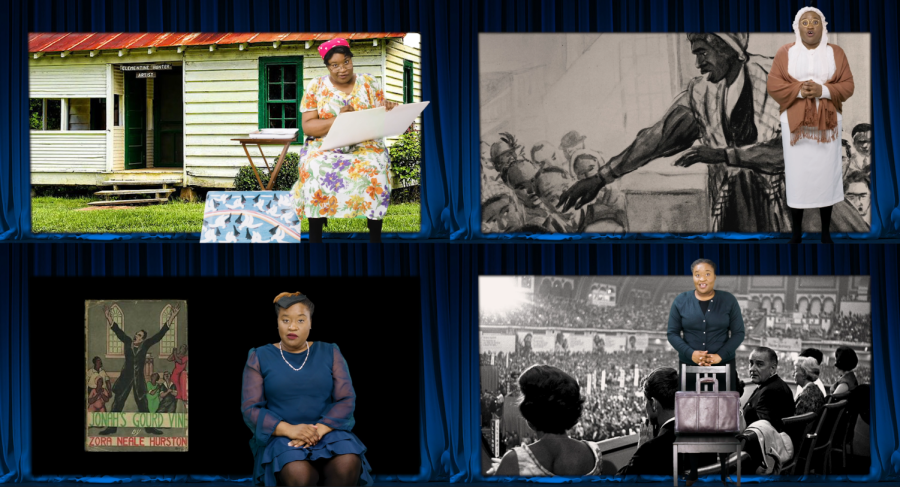 The Core Ensemble is a group dedicated to producing and performing original multicultural, humanist, and feminist topics since 1993. Touring across the entirety of the U.S. they aim to promote intercultural understanding and learning through their performances.

The show presented, “Ain’t I a Woman!” tells the story of four different African American women throughout the history of the U.S., each one historically significant due to the arts that they contributed to the U.S. that represented their people.

The presentation was a one woman show performed by Shinnerrie Jackson, an actress of the core ensemble and accompanied by a varied selection of jazz music as she plays the role of the various people that are represented throughout the show.

The first woman represented is Nora Zeale Hurston, taking place during the Harlem Renaissance period after she had published her first book “Jonah’s Gourd Vine” in which she recalls important moments in her life that had led to influencing the story and her views.

Second was Clementine Hunter, recognized as one of America’s most influential and leading painters due to her work representing the social history of rural life in the deep south of the U.S. She tells of her upbringing as a painter, and her dedication and passion to the art from her humble beginnings of painting on everything she could get her hands on to her finer pieces later in life retelling her life experiences.

Third was Sojourner Truth, the author of the speech, “Ain’t I a Woman!” which the show is named after. She recited the speech in a strong performance going through its entirety with emphasis on its strongest points.

Lastly was Fanie Lou Hamer, a civil rights activist during the mid 1900’s that helped make the push for African Americans to have the fair right to vote, after having suffered countless injustices and using those experiences to fuel her passions.

The show ended with an array of historical jazz songs sung by Jackson, concluding the stories of the many African American women who had changed this country with their talents.